Music I Filmographie I Videos

William Armstrong abandons the family during Louis’s infancy. Louis spends the first years of his life living with his paternal grandmother, Josephine Armstrong. After age five, Louis lives in a two room house near Liberty and Perdido Streets with his mother and sister, Beatrice (who was nicknamed Mama Lucy). The family lives in stark poverty.

Forms a vocal quartet with three other boys and performs on street corners for tips. The Karnofskys, a family of Russian Jewish immigrants, hires Louis to work on their junk wagon. Purchases his first cornet with money loaned to him by the Karnofskys. 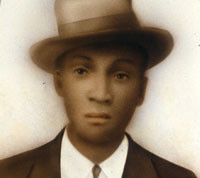 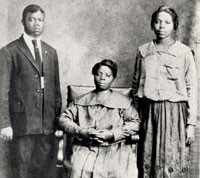 Fires a pistol in the street to celebrate New Year’s Eve. A nearby policeman arrests Louis and the next day he is confined to the Colored Waif’s Home for Boys.

While in the Waif’s Home, Louis receives musical instruction from the band director, Peter Davis, and eventually becomes leader of the Waif’s Home band.

Released from the Waif’s Home on June 16, 1914. Lives briefly with his father, William Armstrong, then returns to his mother. Joe Oliver, one of the finest trumpet players in New Orleans, becomes Louis’s teacher and mentor. Performs in New Orleans’s honky-tonks with local groups. Delivers coal and sells newspapers to help feed himself, his mother, and his sister.

Joe Oliver moves to Chicago and Louis takes his place in the Kid Ory band, a leading group in New Orleans, and also performs occasionally with the Tuxedo Brass Band. Marries Daisy Parker, a prostitute from Gretna, Louisiana.

Separates from Daisy. Moves to Chicago in August to play second cornet in the band of Joe Oliver, now nicknamed ”King“ Oliver.

Makes his first recordings on April 5th at the Gennett Studios in Richmond, Indiana, as a member of King Oliver’s Creole Jazz Band. The band also records for Paramount, Columbia and Okeh.

Marries Lil Hardin, the pianist in the King Oliver’s Creole Jazz Band on February 5th. Moves to New York City in September to join the Fletcher Henderson Orchestra at the Roseland Ballroom. Records with Henderson, with Sidney Bechet, and with several blues singers, including Sippie Wallace, Clara Smith, and Ma Rainey.

Records with blues singer Bessie Smith, and Clarence Williams, among others. In November, quits Fletcher Henderson and returns to Chicago. Billed at the Dreamland Café as “The World’s Greatest Jazz Cornetist.” On November 12th, Louis makes his first recordings as a leader of his own group, Louis Armstrong and His Hot Five.

Performs with Erskine Tate at the Vendome Theatre. Continues to record with the Hot Five (and with the Hot Seven in May, 1927). Performs at the Sunset Café with the Carroll Dickerson Orchestra. Meets Joe Glaser (who will later become Louis’s manager). Briefly leads a band, Louis Armstrong and His Stompers, at the Sunset Café. Records “West End Blues” on June 28, 1928, which is today considered one of the most famous recordings in early jazz.

Moves to New York City. Performs at Connie’s Inn with the Carroll Dickerson Orchestra. Appears in the Broadway show, Hot Chocolates. Tommy Rockwell becomes Louis’s manager. Records “Ain’t Misbehavin’” and “I Can’t Give You Anything but Love.”

Performs in Baltimore, Chicago, Detroit, Pittsburgh, and Washington, D.C., setting a pattern of extensive touring that continues for the rest of his career. Appears at Frank Sebastian’s New Cotton Club (Culver City, CA) and the performances are broadcast on radio. Records “Blue Yodel No. 9” with Jimmie Rodgers (the “Father of Country Music”), and “Memories of You.”

Separates from Lil Hardin in August. Appears in his first film, Ex-Flame. Johnny Collins becomes Louis’s manager, against Rockwell’s objections. Makes two extensive tours of the Midwest and the south. Performs at the Roof Garden of the Kentucky Hotel in Louisville, making Louis the first black American to do so. Makes a triumphant return to New Orleans—his first visit since he departed in 1922. Records “When It’s Sleepytime Down South,” which becomes his theme song.

Appears for three months at Frank Sebastian’s New Cotton Club (Culver City, CA). Films “A Rhapsody in Black and Blue,” a one-reel short. Appears in a Betty Boop cartoon, “You Rascal, You.” Departs for England upon the S.S. Majestic on July 9th. Tours Great Britain for three months (July-November). Appears for two weeks at the London Palladium.

Performs in Kentucky, Indiana, Illinois, and Nebraska. In July 1933, returns to England upon the S.S. Homeric. Tours Britain, Scandinavia, and Holland. Ten thousand people greet him at the railway station in Denmark. For much of 1934, Louis lives in Paris. Performs at La Salle Pleyel.

Returns to the United States in January. Joe Glaser becomes Louis’s manager (and remains Louis’s manager until his death in 1969). Appears at Connie’s Inn in New York City (the ensemble is billed as “Louis Armstrong and His Orchestra”) and the performances are nationally broadcast over CBS radio. Esquire runs a feature story on Louis.

Portrays a band leader in the motion picture Pennies from Heaven with Bing Crosby. Records “Swing That Music” (which amazed audiences by Louis’s hitting forty-two high Cs followed by a high E-flat). Publication of Louis’s first autobiography, Swing That Music.

Performs throughout the deep south, including Mississippi, Alabama, Georgia, as well as his hometown, New Orleans. Films Going Places. Divorces Lil Hardin on September 30th—they had been separated for years—and marries Alpha Smith on October 11th.

Portrays Bottom in the musical Swingin’ the Dream, a jazz version of Shakespeare’s A Midsummer’s Night Dream. Begins a six-month engagement at the Cotton Club (New York).

Lucille purchases a house in Corona, Queens, New York City. Louis and Lucille live there for the remainder of their lives. Appears in the motion picture, Jam Session.

Appears at the Nice Jazz Festival, the first international jazz festival. Performs at Carnegie Hall. Makes his television debut on one of the first television broadcasts; the show is called Toast of the Town (later to be known as the EdSullivan Show). There would be many more television appearances to come.

Appears on the cover of Time magazine. Returns to New Orleans to be King of the Zulus at Mardi Gras. Performs in Switzerland, Italy, and France. Private audience with Pope Pius XII.

Appears on the Big Show (a hit radio variety show) with Tallulah Bankhead. Films Glory Alley. Has a hit with “Blueberry Hill.” Records with Louis Jordan and with Sy Oliver.

Appears in the motion picture High Society with Bing Crosby and Grace Kelly. Records with Ella Fitzgerald for Verve Records. Makes a brief visit in May to the Gold Coast (soon to be called Ghana), where he performs for more than 100,000 people at the polo grounds in the capital, Accra. Edward R. Murrow, who has traveled to the Gold Coast with Louis, includes the visit in his documentary Satchmo the Great.

Louis’s appearance at the Newport Jazz Festival is captured in the motion picture Jazzon a Summer’s Day. Appears twice on the Timex Show (NBC television). Films The Five Pennies with Danny Kaye. Films The Beat Generation.

Performs in Sweden, Denmark, the Netherlands, Germany, and Italy. Has heart attack in Spoleto, Italy and is briefly hospitalized. Appears on The Ed Sullivan Show, and the Bing Crosby Oldsmobile Show.

Makes a major tour of Africa (Cameroon, the Belgian Congo, Egypt, Ghana, Kenya, Nigeria, Sierra Leone, and many more countries), as part of a four-month tour sponsored by the U.S. State Department and Pepsi-Cola. Films Paris Blues on location in Paris. Appears at the Newport Jazz Festival each July. Records ten selections with Duke Ellington in 1961, their only collaboration in the recording studio. Performs at a birthday celebration for President John F. Kennedy on May 23, 1963.

Co-hosts The Mike Douglas Show on television for one week. “Hello Dolly” becomes number one hit, knocking the Beatles from the number one slot that they had held for three consecutive songs. Appears as mystery guest on the television show What’s My Line? Performs in Las Vegas. Tours Puerto Rico. July 2 is declared “Louis Armstrong Day” at the World’s Fair in Flushing Meadows Corona Park, just blocks from Louis’s home.

Tour of Eastern Europe. Returns to New Orleans and is given the Key to the City. Enjoys sold-out performances in Montreal, Toronto, and Las Vegas. Films When the Boys Meet the Girls andA Man Called Adam. Broadcasts over Voice of America from the Monterey Jazz Festival. Appears on television shows, The Dean Martin Show andShindig.

Performs in Dublin, Antibes, St. Tropez, and Majorca. Appears on The Tonight Show, the Kraft Music Hall Show and the Jackie Gleason Show. Appears on Operation Entertainment, a television broadcast from Fort Hood (the US Army’s largest base, located in Killeen, Texas). Records “What a Wonderful World” for ABC Records.

“What a Wonderful World” becomes a hit in Great Britain. Performs in Las Vegas, Pennsylvania, Maine, New York, and Mexico. Films a scene for the motion picture Hello Dolly with Barbara Streisand. Records Disney Songs the Satchmo Way. Private audience with Pope Paul VI. Out of respect for the death of Dr. Martin Luther King, refuses to appear at the Oscars and other entertainers follow his example. Is hospitalized at Beth Israel Hospital with heart and kidney ailments.

From February to April at Beth Israel Hospital due to heart problems. Joe Glaser (Louis’s manager since 1935) dies. Travels to London and records on the soundtrack forOn Her Majesty’s Secret Service.

Appears on many television shows, including The David Frost Show, The Dick Cavett Show, The Tonight Show, and a television special with Pearl Bailey. Records the poem “The Night before Christmas” in the den of his Corona home. (It is his last commercial recording.) Performs for two weeks in the Empire Room of the Waldorf Astoria hotel in New York City.

Louis Armstrong passes away peacefully in his sleep at his home in Corona on July 6th. On July 8th more than 30,000 mourners solemnly file past his casket at the Seventh Regiment Armory. A funeral at the modest Corona Congregational Church the next day attracts thousands more than the church can hold. He is buried in Flushing Cemetery in Queens, just a few miles away from his home in Corona.

Biography I Filmography I Videos

Biography I Music I Videos

Every Day's a Holiday (by A. Edward Sutherland)

The Strip (by László Kardos)

Jazz On A Summer's (by Day Bert Stern)

The Five Pennies (by Melville Shavelson)

Biography I Music I Filmography